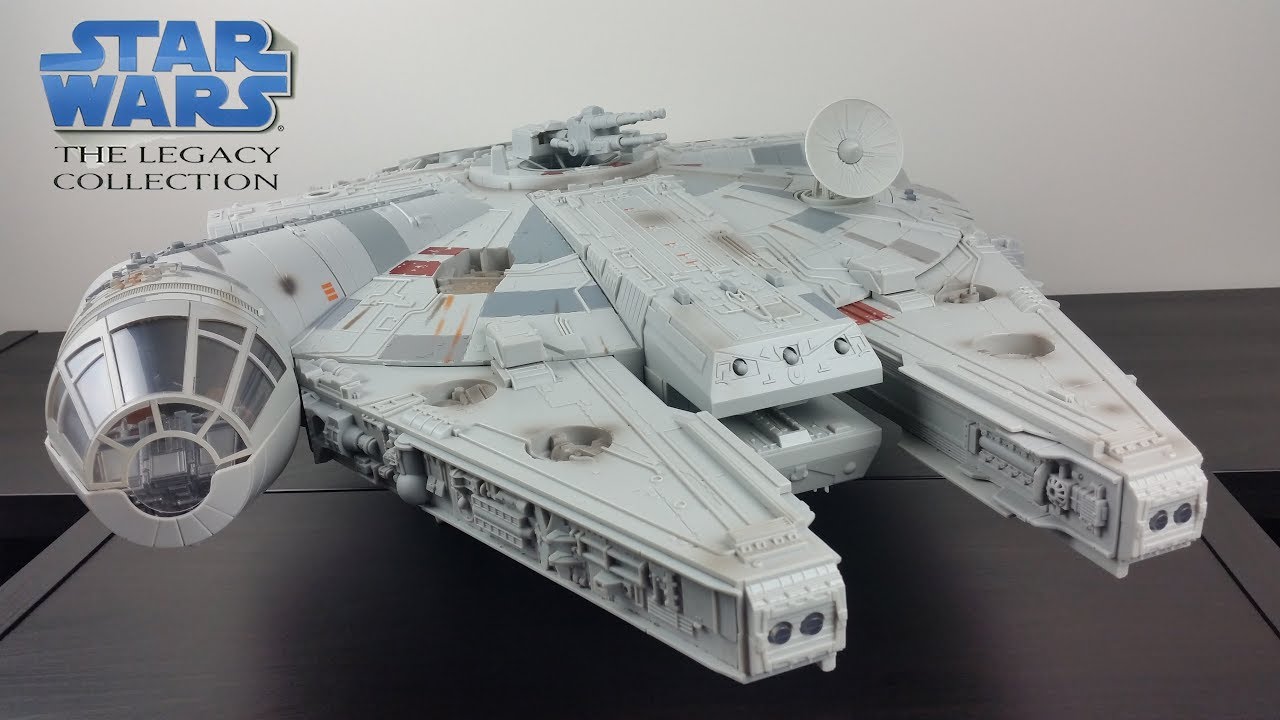 In 1977, ”A New Hope” ushered into the cinemas. With the popularity of the movies, Star Wars action figure toys became a big hit among fans. With “The Force Awakens” and “Rogue One” breaking records at the box-office, we now have new generation of fans and toy collectors.

Older action figures have become highly desirable and the secondary market is exploding with demand. For a new collector, where does one start? Which toy line should you be looking at? This brief will try to answer some of those questions and focus on the Kenner and Hasbro Star Wars Action Figure Toys lines of the past 40 years.

The major eras of action figures consist of: Original Vintage Kenner, Power of the Force (POTF), Saga, Legacy/Vintage Collection(TVC), and Modern era. There will be some overlaps of eras with repacks. Repack is the term referring to a toy’s re-issue without any significant change.

This article will not cover all the sub lines as there are too many to list. The major eras represented here should help you discover and hopefully provide a starting point for reference.

The original action figures originated in 1977 and ran until 1985. This is where it all began and where all the high dollar valuation comes in. With Star Wars’ merchandising in it’s infancy, nobody could have imagined the collecting craze 40 years later.

After the discontinuation in 1985, there was a long period where Star Wars action figures were absent off the store shelves. Due to the long 10 year absence, demand for figures skyrocketed in price. This is the most collectible line with some figures fetching thousands of dollars for mint MOC (Mint on Card) status. The desirability of these figures are two fold – scarcity and the nostalgia factor.

Most of the collectors for these figures are in the older demographics. The 40 to 60 year olds collectors tend to have higher income to splurge and many long for their 1977 childhood. There isn’t much to say about this era. The figures are very distinct in their sculpt with 5POA (points of articulation). They have stiff poses and not very screen accurate.

Vintage Appeal
Despite the flaws, the figures have their appeal. Many of the vehicles are cool. In 1979, Kenner designed a series of mini, smaller vehicles called mini-rigs. Mini-rigs did not have on-screen equivalents and were made up entirely by Kenner to combat the rising inflationary cost of plastics. Despite their non-canon status, Mini-rigs were priced lower and extremely fun to play with.

In an interesting note, after Disney acquired Lucasfilm, many of the past toys and expanded universe story lines were deemed non-canon. In 2013, David Filoni, LucasFilm’s animation head, re-canonized the Imperial Troop Transport. The new Star Wars mobile game, Force Unleashed, re-introduced some mini-rigs as canon.

Pictured above is a CAP-2 with an original Vintage Bossk. For comparison, a Vintage Collection Bossk and Modern Bossk. If you plan on collecting these figures, be prepared to deal with high prices and and an overly competitive buyers’ demand.

After the long ten year hiatus, Hasbro started to make Star Wars toys again under the line, Power of the Force in 1996. Previously, Hasbro acquired Kenner and the rights in 1991.

Short named, POTF, this line was characterized by He-Man chested proportion figures. The POTF era consisted of SOTE (Shadow of the Empire), POTF2, and POTJ (Power of the Jedi) from 1996 to 2002.

SOTE (Shadows of the Empire) Dash Render from the POTF era

Many of the vehicles were re-tooled ‘repacks’ of their Kenner counterparts. For example, the AT-AT Walker appears to be identical to their Kenner version with the addition of some electronics in the middle compartment. As the years progressed, the muscular stances were toned down. Unfortunately, the entire line is currently the least popular among many collectors.

Over Supply and Glut
With the success of the original Kenner toys, there was a large speculative market during the POTF reign. Many people started to hoard POTF toys; hoping to see similar future collector gains from the vintage craze. Due to the pent up demand, Hasbro overproduced the toys in abundance.

Combined with unattractive sculpt and over-supply, POTF toys are the best bargains. Expected to pay $3-6 for a carded figures and the loose, open and played with toys, can be had for buck at local swap meets and flea markets. There will be some exceptions but generally, the POTF line is the cheapest of all the Star Wars toys.

On the plus side, the POTF era gave us wonderful playsets. The Detention Block Rescue, Endor Bunker, and Han Solo Bespin Freezing Carbon Freezing from POTJ (Power of the Jedi) are excellent toys that make great dioramas.

And if you are worried about screen accurate sculpts, many of the droids and astromechs are very good under POTF.

Near the end of the POTF era, LucasFilm introduced the Prequel trilogy. The quality of the toys morphed into better sculpt and new characters from the newer films. There was that early transition period where many of the early Prequel figures had exaggerated POTF like stances. Again, there were some repacks and re-tools of existing figures. This period ran from 2002 to roughly 2004.

In 2004, a new line called the Original Trilogy Collection (OTC), introduced some fairly accurate sculpts and figures with much better articulation. Figures started to have swivel arms and bendable legs and you could get 7 to 11 POA figures around this time.

For the original trilogy vehicles, ships and crafts were often re-packed variation of their POTF equivalent with better paint application. These figures and toys tend to cost around $5-7 with higher values in the later 30th Anniversary years.

Around 2006-2007, the 30th Anniversary collection was celebrating the 30th birthdays of the original movies and the figures were getting much better. This period segues into the next era, to what many collectors call, the “Golden era” of Hasbro Toys.

In July of 2008, Hasbro introduced one of the crowning jewels in their entire history, the Legacy Collection Millennium Falcon. Around 2012, this Falcon was released again in The Vintage Collection (TVC) . Called the “BMF” for “Big” Millennium Falcon, it ushered in the big vehicles. The BAT-AT, again, the B refers to the Big AT-AT. The vehicles were huge with the AT-AT measuring at 24 inches tall.

The Cockpit of Millennium Falcon could seat four figures while the AT-AT could carry 20 figures. During this period, there were various sub-lines as the Clone War (CW) animated series was in full swing. There were CW lines of toys like Shadows of the Dark Side (SOTDS). Here is a SOTDS Slave One (which was later repacked in TVC). Made in 2010, you can see how it eclipse the modern era Slave One.

Some figures in this era had as much as 22 points of articulation. There were a few low count POA figures here and there. Generally, the line introduced some of the best Star Wars toys to date that many collectors favor.

The highlight of this period was the “The Vintage Collection.” Not to be confused with the “original Vintage” line from Kenner, the TVC introduced retro-style packaging. Figures and vehicles packaging got the TVC treatment.

All about Collector emphasis Packaging
Many of the Star Wars TVC figures had limited runs and can fetch high dollars. For example, the TVC Emperor Royal Guard figure was fetching as high as $100. Some of the popular TVC figures have been re-released under the modern 3.75” Black Series. But due to the retro packaging, TVC MOC figures will still command higher prices than their other equivalents.

For many collectors, the modern era is a mix bag. Hasbro has turned the emphasis of super articulation toward the larger 6” Black Series format. The 3.75” traditional figures are designed mostly for kids in mind. With inflation, it simply cost more to manufacture large vehicles and super articulated figures.

When asked about the return of the BMF, Hasbro says a large vehicle of the same caliber would cost $400 to $500 in today’s market. The BMF originally sold for $100 to $200. Super articulated 3.75” figures ,under the Black Series line, is now a Walmart retail exclusive. The regular 6” Black Series are available mostly everywhere. Like their 6” counterparts, the 3.75” SA (super articulated figures) come in similar black and red packaging.

Return of the 5POA
The current , standard figures, have their detractors. The regular line has turned into a 5POA affair like their historical POTF and original counterparts. Unlike the POTF line, modern standard figures do not have dramatic or odd poses. The standard 5POA line is good for child play and retail distribution is widely available. Unlike SA (super articulated) figures, 5POA action figures don’t have standing issues.

Overall, the sculpts are fantastic in all the modern lines. The new Rogue One Stormtroopers is the most accurate to date. Bodhi Rook and old Han Solo figures looks like the actors. These fantastic sculpts are the result of modern 3D full body scanning. Without a doubt, the new figures look very good.

In terms of vehicles, the ships are getting smaller. The U-Wing’s cockpit fits one character. The ship has become a single fighter craft rather than a troop transport. Last year’s “Force Awakens” Millennium Falcon introduced a Nerf feature.

This year’s AT-ACT is a motorized toy that can be operated by a smart phone. These recent moves may appeal to children but have displeased many adult collectors.

On August 1, 2013, Hasbro officially debut the 6” Black Series Line. Currently, this is where the attention is at for super articulation. These figures have incredible amount of detail and articulation. In terms of vehicles, we have the Endor’s Speeder Bike and the First Order Tie Fighter. This format seems to be popular among Toy photographers as well.

With advance articulation, figures can have great poses. What happens next?

On February 18th of this year, Hasbro announced the 40th Anniversary of Star Wars Toys. With a nod to the original 12 figures released by Kenner in 1977, many of the 6 inch Star Wars figures are getting the TVC, retro style card back treatment.

The most exciting piece of this new line is Darth Vader. This new version is more accurate to the 1977 New Hope version of Vader. In each movie, Vader donned a different set of armour. Here, parts of his cloth robe cover the sides of his chest plate. Even the life box gears are ‘New Hope’ screen accurate. The differences in armor will delight hardcore fans.

The 40th Anniversary of Star Wars “A New Hope” is only the beginning. There will be anniversary releases for both “The Empire Strikes Back” and “Return of the Jedi.” Coming this December, Hasbro will introduce new figures for “Star Wars Episode 8, The Last Jedi.” Then next year, a new “Han Solo” film will introduce a younger Solo and crew. It is an exciting time for Star Wars toy fans. Hopefully, this primer gives you some information on where to begin your collecting journey. Having a gaming desk isn’t just a basic want these days, it’s basically become an essential part of any gamer’s complete setup. That being said, most of these desks are specifically tailored for use by PC gamers. So, what about console plebs? Today, we’re going to focus on Xbox fans and reveal what we believe…